Conor Daly finally has his full-time ride in the Verizon IndyCar Series.

The soon-to-be 24-year old driver from Noblesville will drive the No. 18 Dale Coyne Racing Honda for the 2016 season. Daly drove that very same car last year at Long Beach, in what was an impressive drive. Filling in on short-notice, he improved his starting position by four spots, and recorded the second fastest lap for a Honda driver, in route to a 17th place finish. Now with plenty of time to test and prep, Daly will have every opportunity to prove himself on the track.

Sponsorship for the car will be provided by Jonathan Byrd’s Hospitality & Restaurant Group, with the exception of the Indianapolis 500, where it will appear on the No. 88 car. That drive will belong to Bryan Clauson, who will attempt to qualify for his third Indy 500 in May. Team Owner Dale Coyne didn’t stop there either. He said they plan to run four cars on the Indianapolis oval. Those cars would be Daly, Clauson, Pippa Mann, and the other full-time driver. 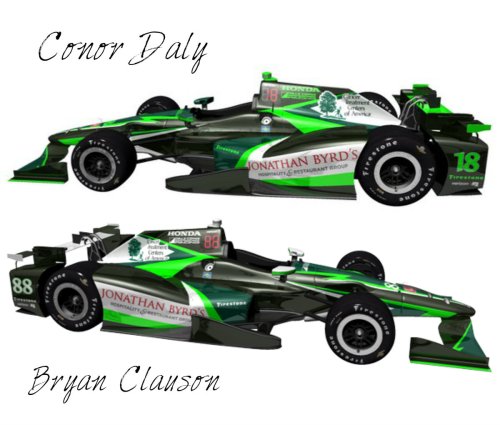 Dale himself was more than satisfied with Conor’s performance at Long Beach last year. “It was a much improved weekend for our team. As for Conor, he was perfect, he was professional, and showed increased speed with every lap.” Not bad for a kid in his first ever street circuit race in IndyCar. Daly participated in five races in 2015, which was highlighted by a strong run in Detroit with SPM. He was running up front in the first race, before Ryan Hunter-Reay ran into the back of him, puncturing his right-rear tire. He led 12 laps in the second race, and finished in sixth position.

Heartbreak came at Indianapolis Motor Speedway, as Daly’s SPM car suffered a mechanical failure moments before the start of the Indy 500. After the month-long preparation, he was unable to even start the race. Now, Conor will aim to make his third-career Indy 500 his best yet. The 100th Running of the Indianapolis 500 is May 29.

“This is truly the most meaningful announcement of my career,” said Daly. “After experiencing what I have in my career, especially the last three years, it is an incredible honor and opportunity to work with Dale Coyne Racing for a full season. To be able to go head to head and take the fight to other drivers every weekend is very exciting. I cannot thank Jonathan Byrd’s Hospitality & Restaurant Group and all of Jonathan Byrd’s Racing’s partners enough for their effort in putting this program together. I am ready to get to work and try my best to outwork everyone else in the field every weekend to get results for this team.”

Its been a tough road to get a chance to WORK full time as an @indycar driver. Can't thank @dalecoyneracing @byrdracing enough! Surreal..!

In today’s world, it’s refreshing to see a young driver that so strongly desires to be a part of IndyCar. Every kid grows up on the field or the court, dreaming of one day playing in the NFL or NBA. For Conor, it’s always been his dream to become a full-time driver in the IndyCar Series. He has that now, leading the way for Dale Coyne Racing. Looking at it from every angle, this is the ultimate win-win for everyone.

Below are some highlights from the Detroit and Toronto races last year, where Conor turned some heads.

In addition to the five Verizon IndyCar Series events last year, Daly drove in six Tudor United Sports Car Championship races. His Performance Tech Motorsports team finished on the podium in half (three) of those events. Conor would always find a way to get behind the wheel of something, anything with four wheels. His won’t have as much free time in 2016, which is perfectly okay with him.

The persistence has paid off for Conor, and he’ll be getting down to business early next week, testing on his birthday. He and another driver will be testing the Coyne cars at Sebring on December 14 and 15. James Hinchcliffe and Mikhail Aleshin will also be there, testing with their SPM team.

Robin Miller spent a few minutes with Conor earlier in the day at the PRI show.

Today’s announcement is a reminder that hard work and dedication pays off. Conor is proof that if you truly want something bad enough, you can find a way to make it happen. After all of the Star Mazda/Lights/GP3/GP2 seasons, the part-time driving, and serving as the two-seater chauffeur, Conor Daly has finally landed his much-deserved full-time IndyCar ride.