The final day of practice for the 102nd running of the Indianapolis 500 was a little wild. Sage Karam had the fastest lap of the day at 226.461 mph, but that was not the story of the day. Rookie Robert Wickens crashed less than an hour into the session, and severely damaged his No. 6 Honda. Fortunately he was okay, but it was another crushing blow in what has been a devastating three-day stretch for Schmidt Peterson Motorsports.

Wickens brushed the wall on the exit of Turn 2, which broke the suspension of the car. A few seconds later on the backstretch, the car took a sudden turn to the right, destroying the right side of the vehicle. 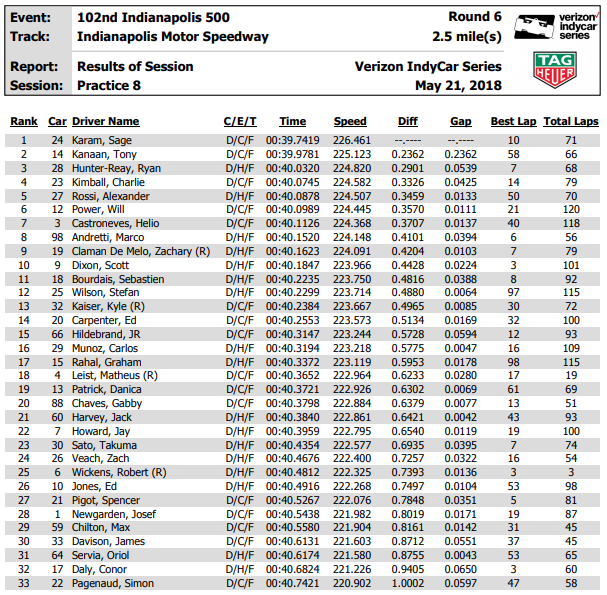 The practice following qualifying weekend has become the most exciting and action packed in recent years, and today was no exception. With single-car runs out the window, today is all about race conditions, and running in heavy traffic. There were a total of 2,526 laps turned by the 33 drivers on Monday, in what was about a 3-hour session. The start of practice was delayed about 30 minutes for light rain that fell just before the green flag was set to wave. Will Power logged the most laps today with 120, while Wickens only logged 3 laps before his day ended early.

“I caught it, then just ran out of track and brushed the wall,” Wickens said. “It was suspension damage on both sides and I was just trying to slow down and get it under control, and the car just pretty violently went to the right and went head on into the wall halfway down the back straight. “It’s a bummer, obviously, no one wants it, especially this close to the race.”

Hate what happened to @robertwickens today. Our team is awesome, he is awesome, and both will be right going hard on Carb Day.

Karam and Tony Kanaan were the only drivers to make a lap under 40 seconds. Sage said that he just happened to catch a great draft and that “anyone in the same position could have set the same lap time.” That being said, every driver would still like to see their name at the top of the chart heading into race weekend.

The only track time remaining is Carb Day, which is Friday. There will be a one-hour practice session at Noon, which can be seen live on NBCSN. The day will also feature the Indy Lights Freedom 100 race, and the Verizon IndyCar Series pit stop competition. That will be the final on-track action until the 102nd running of the Indianapolis 500 on Sunday.