Sunday’s race in St Petersburg was all about redemption. Colton Herta capitalized the most by dominating the race from pole position and earning his fourth career victory. Herta led 97 of the 100 laps and held off the competition on a couple of late restarts to win the race. He now has as many victories in his career as his father, who helped guide him to victory on Sunday.

Another driver who rebounded nicely from a disastrous start to the season was Josef Newgarden. The Team Penske driver crashed on the opening lap of the season-opener last weekend at Barber Motorsports Park but had a fabulous weekend in the sunshine state. Newgarden finished 2nd in his bid at winning his third-consecutive race on the streets of St Petersburg. Teammate Simon Pagenaud had a solid drive and finished 3rd, earning his first podium finish since the Iowa race weekend last year. 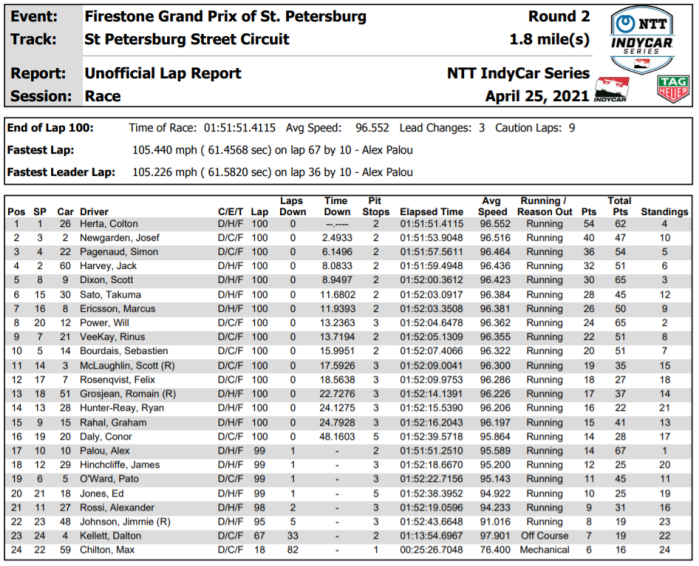 The last three wins for Colton have come in races where he started on pole. “What a great job by everybody,” Herta said. “Sorry, I can barely talk; I’m so winded. I’m so happy we did this, so happy to rebound from Barber and get the momentum going for the season that we need, which is a championship season.”

Newgarden had nothing but praise for Herta’s performance on Sunday. “I felt like I had close to an opportunity, but Colton was really good. He was doing a great job on the restarts. Congrats to Colton. It’s a great rebound for both of us. I felt bad about what happened last week, so really happy he got back on it today and had a very deserved victory. I wish we could have fought him a bit more. We were just lacking a little bit.”

After narrowly missing out on pole position yesterday, Jack Harvey had a great Sunday afternoon and finished 4th for Meyer Shank Racing. Scott Dixon, who still has not won in St Petersburg, earned another top-five finish to lead the way for Chip Ganassi’s team. The six-time series champion still has not led a lap here since the 2012 race. Takuma Sato passed quite a few cars on Sunday, improving from his 15th starting position to finish in 6th place.

Marcus Ericsson had another sneaky solid result, bringing his Honda machine home in 7th after starting back in 16th. Will Power started the race in 20th after an uncharacteristic poor qualifying performance on Saturday and finished 8th today. After earning top-six finishes last weekend at Barber Motorsports Park, both Rinus VeeKay and Sebastien Bourdais finished inside the top ten in today’s race.

Scott McLaughlin finished behind his three Penske teammates, but the rookie had a solid outing with an 11th place finish. Felix Rosenqvist was 12th as he continues to try to find his groove with the Arrow McLaren SP team. Romain Grosjean had another impressive run and finished just ahead of seasoned veterans Ryan Hunter-Reay and Graham Rahal. Rahal was poised to have a great finish but contact with Alexander Rossi on Lap 37 ended his hopes.

Alexander Rossi and Graham Rahal get together! 😱 #INDYCAR // @NBC pic.twitter.com/ubWdxZ8uDB

Conor Daly had a quiet afternoon and finished 16th as he hands the No. 20 Chevrolet off to his boss Ed Carpenter for the next two races at Texas. Daly told NBC reporters that he plans to be at Texas next weekend, likely filling in for Carlin Racing again in the No. 59 car. Alex Palou did not have a great weekend despite leading two laps and recording the fastest lap of the race. The race winner from a week ago finished 17th on Sunday, the first car a lap down.

James Hinchcliffe was the last Andretti Autosport driver to win this race, back in 2013. He had no good luck today though, getting knocked around on two separate occasions by Sato and Ed Jones. Pato O’Ward qualified well on Saturday but his race day was dreadful. The young driver was dropping through the field all afternoon and wound up finishing in 19th place.

Rossi’s incident with Rahal derailed his trajectory of a possible top-five finish. The Andretti driver sits 19th in the championship standings after two races. He and Rahal both classified the contact as just a racing incident. Jimmie Johnson struggled to get around the course, bringing out the full-course caution on multiple occasions. He finished just ahead of Dalton Kellett who got stuck off course for the final 33 laps, and Max Chilton, who had a mechanical issue that ended his race just 18 laps in.

After opening the season with a road course and a street course, the series will now head to Texas Motor Speedway for a pair of races on the 1.5-mile oval. The first race will be the Genesys 300 on Saturday night at 7 PM ET, followed by the XPEL 375 at 5 PM on Sunday. Both races will air live on NBC Sports Network. This will be the final event before the series returns to Indy to begin the Month of May at the Indianapolis Motor Speedway.