Colton Herta kept his west coast momentum going on Friday, leading the opening practice session for this weekend’s season-ending race in Long Beach. Herta dominated last weekend at Laguna Seca, leading 91 of the 95 laps on his way to a second consecutive race win from pole on his favorite track. Today the Andretti Autosport driver lapped the famous street circuit at 69.2690 seconds, just ahead of Simon Pagenaud and championship leader Alex Palou.

In order to win the title this weekend, Palou essentially just needs to finish inside the top 11 and the Astor Cup will be his. Both Pato O’Ward and Josef Newgarden will need to win the race and have some misfortune find the No. 10 Ganassi car. Bonus points could very well factor into who wins the championship, and one will be available tomorrow in qualifying. Both contenders will need to find more pace than they had today, as Newgarden was 10th fastest and O’Ward was 16th, respectively. 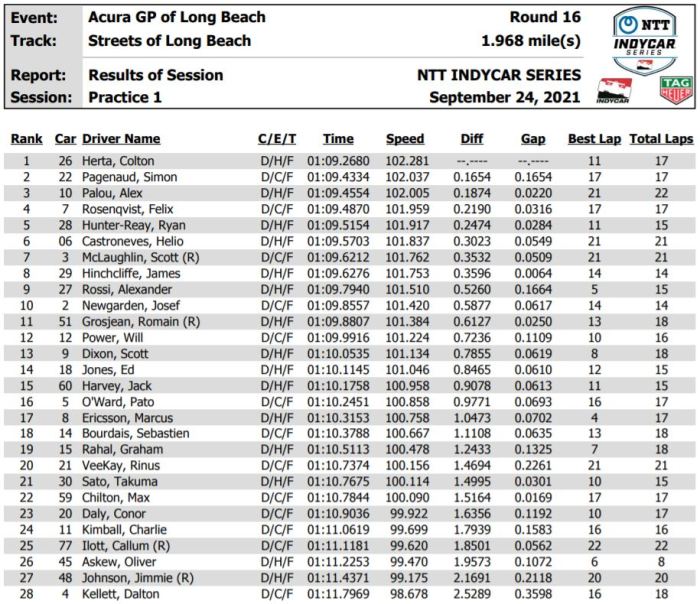 O’Ward’s teammate Felix Rosenqvist was 4th fastest overall today, with Ryan Hunter-Reay rounding out the top five. It will be an emotional weekend for Hunter-Reay, as he makes his 198th and final start with Andretti. The team officially introduced his replacement in the No. 28 DHL Honda for next season, former Formula One driver and current Dale Coyne Racing w/ RWR driver Romain Grosjean. As he prepares for his first full-time season in 2022, Grosjean will participate in the October 8 oval test at the Indianapolis Motor Speedway.

Another driver that knows that particular place very well is Helio Castroneves, who finally joined the four-time winners club back in May. He was 6th fastest in today’s practice, leading the way for Meyer Shank Racing, whom he will drive for full-time next season. Scott McLaughlin was 7th and James Hinchcliffe was 8th, as he prepares to make his final voyage in an Andretti car this weekend as well.

Alexander Rossi and Newgarden rounded out the top ten, as all 28 drivers put in a total of 479 laps on Friday. There were plenty of off-track excursions in today’s 45-minute practice session. Newgarden spun in Turn 9 and was given a five-minute time penalty for causing a red flag. Oliver Askew went off course in Turn 8 and damaged the rear end of his No. 45 RLL Racing Honda. He was also given a time penalty for causing a red flag during the session. Even Scott Dixon found the tire barrier in Turn 1 but he was able to get away without any damage. Even Herta had himself a moment.

The 2022 picture began to take shape even before practice began today, with Juncos Hollinger Racing signing Callum Ilott to drive the No. 77 Chevrolet full-time next season. The Alfa Romeo Formula One reserve driver and Ferrari Formula One test driver will be in the car for his third race this weekend. Andretti’s announcement with Grosjean shortly followed as the dominos have started to fall. There will be more Silly Season news to come in the following weeks.

Palou leads O’Ward by 35 points heading into the event, as both second-year drivers aim for their first IndyCar championship on Sunday. “It was a good session,” Palou said. “I like the track. It was all about getting to know the track and see how that No. 10 NTT DATA car was handling. I’m comfortable and ready to push tomorrow.” O’Ward was less than pleased with how today’s session went. “We need to work. We just need to sort something out, find time.”

There will be one final 45-minute practice session tomorrow at Noon ET, followed by qualifying for the Acura Grand Prix of Long Beach, which begins at 3 PM. NBC Sports Network and Peacock Premium will provide live coverage of qualifications.